The 2020 DC Retail Summit: Our Recovery will bring together local retail & restaurant businesses, thought leaders from the private & public sectors, and community stakeholders.

Discussions will provide practical and solutions-based advice and resources to help entrepreneurs and local businesses adapt during COVID-19 and identify market opportunities in a changing economic landscape. 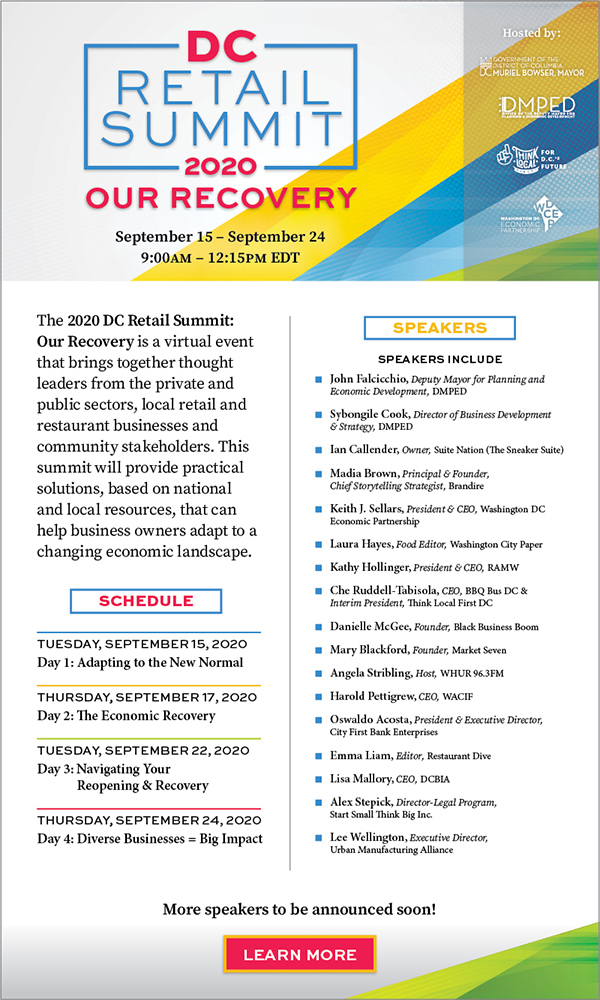 We know that issues can come up in any community. It’s usually fastest to communicate directly with your neighbor to address concerns related to home sharing, but you can also call or message us below for additional support. If you have a concern unrelated to your neighborhood, please visit our Help Center.

Dear neighbors:
Commissioner Edward Daniels from ANC 6D has just scheduled a last-minute community discussion regarding the homeless encampments underneath the 695 bridge along VA Ave SE. This discussion has been on-going amongst several of my constituents for several months.
He has scheduled a virtual community discussion and would love for you to be a part of this conversation and to share the information with other residents, if possible. Text and link are below. Graphic attached.
Meeting Information:
Please join tomorrow, Sunday evening, 10/4, at 7:00 pm for an online community discussion.
Please RSVP for Zoom link & password. I look forward to hearing everyone’s thoughts.
www.edwarddaniels.com/commissioner

ANC Commissioners from across the District will host a virtual Town Hall conversation on “Reimagining Policing in the District of Columbia” this Saturday, July 18, 10:30 am–12:00 pm. The public is invited to attend.

The forum will be a moderated panel discussion with representatives of the Metropolitan Police Department, NAACP-DC Chapter, Councilmembers Charles Allen and Robert White, and The Guardian Angels. We have also extended invitations to the Mayor’s Office and Black Lives Matter-DC.

Panelists will respond to questions generated out of a virtual ANC Commissioners-only conversation with nearly 50 Commissioners last Friday as well as questions submitted from audience members during the event. You can still submit questions by sending an email to 6b08@anc.dc.gov. Dr. Sharita Thompson, professor of African and African American Studies at Gettysburg College, and Dr. Bernard Demczuk, of George Washington University, will moderate the discussion, which follows an ANC Commissioners-only conversation we held last week in preparation for this event.

The policing forums are an outgrowth of weekly online meetings to discuss the impact of COVID-19 on communities that were initially convened in March by Chander Jayaraman, Vice-Chair of ANC 6B on Capitol Hill. At those meetings, Commissioners across the District gathered information and ideas from their Single Member Districts to share with each other and with city officials.

You can join the Town Hall online at:
https://bit.ly/July18TownHall

From the Office of the People’s Counsel

The Office of the People’s Counsel is an independent agency of the District of Columbia government. By law, it is the advocate for consumers of natural gas, electric and telephone services in the District. District of Columbia law designates the Office as a party to all utility-related proceedings before the Public Service Commission. The Office also represents the interests of District ratepayers before federal regulatory agencies. The Office is authorized to investigate the operation and valuation of utility companies independent of any pending proceeding. Stay Informed: What Is COVID-19?

COVID-19 is a new strain of coronavirus that has not been previously identified in humans. The COVID-19 is the cause of an outbreak of respiratory illness first detected in Wuhan, Hubei province, China.

Since December 2019, cases have been identified in a growing number of countries.

Coronaviruses are a large family of viruses that are known to cause illness ranging from the common cold to more severe diseases such as Severe Acute Respiratory syndrome (SARS) and Middle East Respiratory Syndrome (MERS).

Public health authorities are learning more every day. We will continue to update as we learn more.

Stay up-to-date on COVID-19 in the District by visiting the official website for this event: http ://dchealth.dc.gov/coronavirus

Or visit the CDC website for information on Coronavirus Disease 2019 (COVID-19) at: https://www.cdc.gov/coronavirus/2019-ncov/index.html The American Civil Liberties Union of the District of Columbia (ACLU-DC) invites the residents of ANC 6B for a brunch and community discussion. This brunch will be held 11:30-2p this Saturday February 29 at the Community Action Group, 124 15th Street SE.

While hosted by local, neighborhood venues, we hope these will be opportunities to connect with District residents as well about the work, mission, and values of the ACLU-DC. Participants will also learn about our active and ongoing campaign and coalition work, overview of our legal department, and how to join the ACLU-DC as a volunteer or member.

RSVP to Larry at lbryant@acludc.org (space is limited).

About The U.S. Census

Every 10 years, the U.S. government counts every person living in our country in the Constitutionally-mandated Census. Once Census collection is over, the U.S. Census Bureau analyzes and release critical census data.

The more accurate the data, the easier it is to ensure that we are meeting our community’s needs. When data is inaccurate, we miss out on billions of Federal dollars.

We Need Your Help

In 2010, DC was the second most undercounted city* in the nation, with the highest concentrations of undercounted folks living in Wards 1, 5, 7, and 8. The following groups have been historically undercounted in the District:

In 2010, DC was one of the most undercounted cities in the nation.  What did that mean for us?

Well, the District potentially loses out out on billions of Federal dollars through large scale federal entitlement programs.

Follow the link above to find out more information and to fill out the census online! Please join Mayor Muriel Bowser and members of the Bowser Administration at the Keep Metro Open Rally. The District of Columbia needs a Metro system that functions during the same hours as our residents, local businesses, and workers. Let your voice be heard!

This event is free and open to the public. Please RSVP at the following link. http://KeepMetroOpen.eventbrite.com